Excess heat from energy-intensive industries is often suitable for use in district heating systems but is usually unutilized. A detailed overview of the potentials available in the EU is now provided by a database of the sEEnergies project. In Germany, 29 petajoules of excess heat from industrial sites could be used, which corresponds to the demand of more than half a million households. The information is available as maps and downloadable datasets.

In the EU project sEEnergies, a consortium of universities and research institutes is developing a holistic modelling approach to quantify the potential for energy efficiency in buildings, transport and industry throughout the EU and to make this knowledge exploitable. One possibility for the efficient and low-carbon heat supply of buildings is the use of industrial excess heat in district heating systems. Energy-intensive industrial sites in the chemical, iron and steel, cement, glass, paper and refinery sectors have a lot of excess heat, mainly through flue gases, but at present this heat is rarely used. 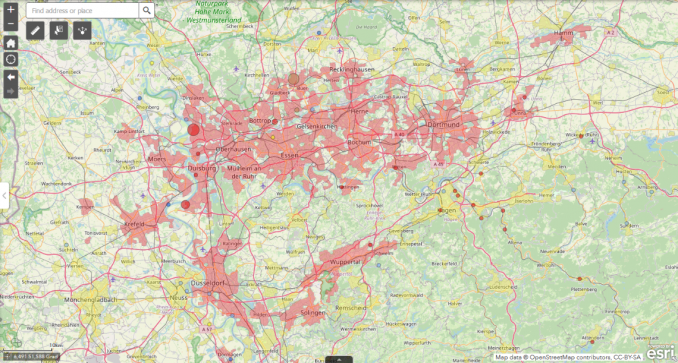 Screenshot from the sEEnergies online web app. It shows the actual (red) and maximum possible spread (yellow) of district heating systems in the Ruhr Area, together with different industrial locations (colored dots).

The consortium has linked four databases in order to assess and visualize this hitherto mostly unused potential throughout Europe. Fraunhofer ISI has used a new methodology to determine the excess heat potential. For this purpose, the project team has created a database of 1,608 industrial sites. In this database, the locations are compared as heat sources with data on heat demand and existing and maximum possible district heating networks in a geographic information system (GIS). The data obtained is available as a map view and the datasets can be downloaded.

Additional similar synergies can be identified with the help of the calculated potentials and the spatial analysis. In the Ruhr Area, for example, as a densely populated region characterized by industry, the potentials are particularly high: Large amounts of industrial excess heat could be integrated, while the existing district heating networks could be expanded cost-efficiently.

The ambitious expansion of efficient district heating networks and the connection of industrial excess heat sources to district heating systems should be central elements in the transition to a sustainable and CO2-neutral heat supply in Europe. To this end, obstacles must be removed, for example, by providing market access to heating networks for third parties and securing long-term supply contracts through financial coverage of downtimes. However, industrial excess heat alone will not suffice: The main source of district heating in the future has to be renewable energies, in combination with large heat pumps and decentralized heat pumps.